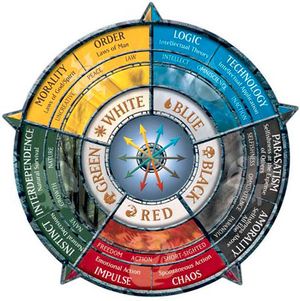 a richer representation of the concept ("white" is shown in yellow)

The color pie or "color wheel" is a concept used by the card-trading game Magic: The Gathering (MtG) as a way of categorizing how individuals are motivated. Although it was created for usage in a fictional context, it seems to map fairly well to how real people are motivated.

The colors are shown on the back of every MtG card in a pentagonal pattern, such that each color is opposite two other colors which generally oppose that color's motivations (its "enemies"). Clockwise from the top, the colors are:

Fully-realized characters (or real-life individuals) most often consist of some combination of these traits, often including colors that are mutual "enemies". An example: