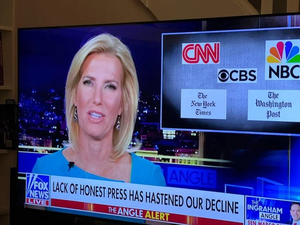 lack of honesty has hastened their decline

The Fox News network claims a commitment to "fair and balanced" reporting (supposedly countering the liberal media bias of other stations), while actually serving as a mouthpiece for the plutocracy and its allies. Fox News not only slants its stories heavily toward a neoconservative point of view but (unlike true news outlets) also does not follow up when factual errors are discovered. This sort of unblinking hypocrisy is typical of the authoritarian mindset which is apparently in control of the station's editorial agenda.

Fox News rose to prominence during the Bush-Cheney administration, when it was widely seen as a mouthpiece for that administration. When Bush was succeeded by Obama, Fox went on the offensive, with its anchors often saying many of the same things about Obama which they had criticized others for saying about Bush.

Fox's prime commitment is to the triumph of conservative politics, not to a well-informed public. From hiring hosts to selecting stories to framing questions for discussion, Fox demonstrates its dedication to advancing the ideological interests of the right. [...] Conservatives retort that other media project a liberal bias, while Fox presents a needed counterweight. The liberal bias of network news is debatable; that Fox regularly reports false and inaccurate stories designed to drum up support for their candidates and causes is beyond serious dispute.