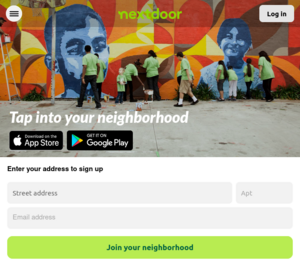 Nextdoor (ND) is a "hyperlocal" social network web site which encourages local discussion through partitioning it off geographically. Members are required to provide their home address at sign-up time, in order to facilitate this, and the "neighborhood" to which each user belongs (according to ND's mapping) is shown with their posts and on their profile.

Nextdoor's approach to moderation appears to be wildly inconsistent in a way which tends to favor counterfactualism and rules-lawyering.

One user who wrote to ND about his posts being deleted received the following reply:

«In group's content does have to remain civil and respectful. Insults, even toward political figures are not allowed anywhere on Nextdoor.»

This is part of the general pattern of not allowing strong expressions of feeling, even in Group posts, which tends to favor those who are content with the status quo.

This practice rewards reporting over substantial debate, as it is easier to get a post removed for being insulting towards a political figure than it is to address the content of that post.

It also is not consistently enforced; see "Inconsistency" below.

It is also very easy to conceal highly disrespectful ideas in respectful language, which encourages "polite" baiting and trolling.

Nextdoor forbids discussion of its moderation practices anywhere except in groups specifically created and dedicated to that purpose. This also encourages rules-lawyering and arbitrary deletions by Group moderators, as they can unfairly delete posts or comments they disagree with and then report anyone who mentions these deletions. This rule is also not made clear in the Guidelines.