Difference between revisions of "Two-party system" 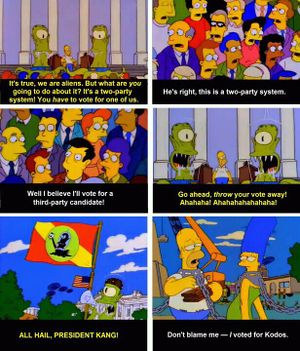 A two-party system allows the powerful to prevent outsiders from gaining power.

A two-party system is a political party system where only two political parties have a realistic chance of winning an election, i.e. political power is controlled by a duopoly. It is most commonly an emergent effect of first past the post voting, rather than being explicitly enforced by law (as contrasted with one-party systems, which are usually intentional).

In a two-party system, voters are effectively forced to choose between voting for the "lesser of two evils" or else "wasting" a vote on a candidate who is unlikely to win and thereby allowing the "greater evil" party to win the election (a fear nicely paraphrased by humorist Douglas Adams as "the wrong lizard might get in").

In theory, voting would still serve as a check on corruption because if both parties became too corrupt, a third party would begin to gain adherents. In the United States in the late 1990s and early 2000s, however, the "greater evil" party (US Republican Party) was able to maintain its core followership by a pattern of authoritarianism (attracting voters who were inclined to vote based largely on perceived authority rather than critical thinking), blatantly lying about the actions and motives of the "lesser evil" party (US Democratic Party), and being in control of the majority of the mainstream media (which then reinforced their lies, distortions, and framing).

One likely cause of such a system seems to be inherent in the logic of a one-vote-per-person, winner-take-all voting system, where the stable number of parties in any winner-take-all system with a fixed number N of binary (yes/no) votes per voter appears to be N+1. If the number of votes is 1, then the number of stable parties is 2; if the voting system were modified to allow two votes per voter (i.e. pick your two favorite candidates, with or without ranking), then there would be three stable parties -- and so on.

If this is true, then one obvious way to eliminate the two-party-system altogether is to switch to a voting system such as range voting which more accurately reflects voter preferences.

The alternate domination of one faction over another, sharpened by the spirit of revenge, natural to party dissension, which in different ages and countries has perpetrated the most horrid enormities, is itself a frightful despotism. But this leads at length to a more formal and permanent despotism. The disorders and miseries, which result, gradually incline the minds of men to seek security and repose in the absolute power of an individual; and sooner or later the chief of some prevailing faction, more able or more fortunate than his competitors, turns this disposition to the purposes of his own elevation, on the ruins of Public Liberty.

The Soviet Union had a single, entrenched, systemically corrupt political party, which held a monopoly on power. The U.S. has two entrenched, systemically corrupt political parties, whose positions are often indistinguishable, and which together hold a monopoly on power. In either case, there is, or was, a single governing elite, but in the United States it organized itself into opposing teams to make its stranglehold on power seem more sportsmanlike.