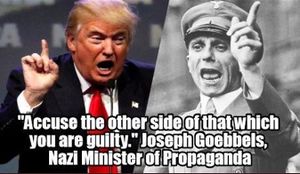 Goebbels wasn't advising this as a tactic; he was claiming that others were doing it to Germany...

A mirror argument is any argument where accusations which might legitimately be made against one party are pre-emptively made by that party against the other.

In other words, if:

then B is using a mirror argument.

This type of argument seems to have a lot in common with the phenomenon of psychological projection or even projective identification, where the speaker (A) tries to induce the other (B) to assume the attributes necessary in order to be (seen as) the party who is in the wrong.

The Conscious Theory: Accusing someone else of one's own transgressions has benefits in an argument, especially if personal integrity is not a priority. These benefits include:

The Unconscious Theory: This theory is a bit more complicated, and has three parts to it.

If this theory is true, it would seem to have a wide range of interesting implications (most of which I have yet to work out). It could well explain a lot of hostile attitudes towards the ideas of "negotiation" and "compromise", for example. To someone for whom words are blunt instruments whose effectiveness is determined largely by the degree of force used, social interaction must seem to consist largely of dominance games rather than cooperation for mutual benefit.

"Pot Calling the Kettle Black" theory: A mirror-arguer may simply be understanding someone else's outward actions solely in the context of what motivations the mirror-arguer might have for doing the same thing, and then jumping to the conclusion that this explanation is correct. (This explanation is essentially a milder form of the "psychological projection" phenomenon.)

This phenomenon was originally described to me by someone who later used it against me (accusing me of a wide variety of stuff which I had definitely not done and which he had either actually done or tried to do, or which sounded more like his kind of behavior than my kind), so if true it's highly ironic; I'm also therefore a little suspicious of it because of the source. I've had at least one or two other anecdotal confirmations of similar behavior, however, and I'm also seeing the pattern popping up in other contexts such as political debate.

The person who described it called it simply "mirroring", but Wikipedia's entry for mirroring describes a rather different phenomenon.

Thanks to Vee for verbalizing the "Pot Calling the Kettle Black" theory and for finding the term "psychological projection" in Wikipedia.