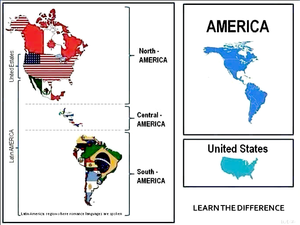 Geographically, "America" is a pair of continents, not a country.

Although the word "America" technically includes all of North America (i.e. the US(A) plus Canada and Mexico), the several countries of Central America, and the many countries of South America, it is almost always used as a synonym for the United States (of America). Furthermore, it is most often used when discussing the culture and people of the US, rather than the US as a geopolitical entity. In this usage, "America" is at least as much an idea as it is a place.

Most reference works seem to resolve the issue by avoiding use of the standalone term "America" altogether, referring to the double-continent as "the Americas" and referring to the country as "the United States [of America]".

Issuepedia will endeavor to use US and USian as more accurate replacements for this sense of the words "America" and "American".