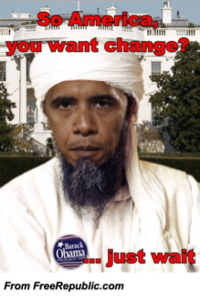 There have been repeated claims that Barack Obama is in some way a Muslim. These claims are completely false. They originally appeared to be part of a smear campaign designed to shave away support for Obama's 2008 presidential bid, although they persist to some degree even in the later years of Obama's final term as President.

These accusations, though completely contrary to the American ideal of tolerance, seem to resonate with some people who are apparently willing to grab at any excuse, no matter how shallow, to dislike Obama – possibly as a way of avoiding an admission of racism. (Indeed, many of these smears also include racial elements.)

There have also been repeated attempts to associate Obama with prominent "enemy" figures and paint him as a closet terrorist:

In January 2007, Fox News ran stories claiming that the Clinton campaign had discovered that Obama was educated in an Indonesian madrassa (Muslim religious school). Obama did attend a local public school (not a madrassa) in Jakarta between the ages of 6 and 8; after that, he was enrolled in a Roman Catholic school. He did not appear to take his religious studies seriously in either school.

In 2008, Edward Luttwak published an article in the Wall Street Journal arguing that Obama would be considered an apostate Muslim by Islamic law due to his father being born Muslim, and concludes that this could be bad for foreign relations. This story was gleefully repeated by others (e.g. James Taranto), but it is also false. See commentary on the Luttwak article for more information.

Despite its falsehood, this accusation appears to remain credible to many people, e.g. pro-McCain rallyers who admitted to believing that Obama is a terrorist because "he has the bloodlines for it". 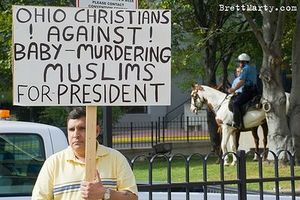 Apparently the smear has taken hold so completely that "a Muslim running for president" is understood to mean Obama.