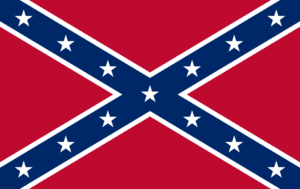 battle flag of the Army of Tennessee

In popular usage, the phrase "Confederate flag" almost always refers to a particular variation of the Confederate States of America battle flag which was used by the Army of Tennessee and also known as the second Confederate "Navy Jack" (each of those variations having slightly different colors and details).

While there have been many claims that the flag is more representative of "Southern culture" or "Southern pride" (in tandem with arguments that the South's attempted secession was not primarily in support of slavery), it was in fact conceived for racist purposes and in modern times is typically displayed with racist intent, though often not overt.

In the words of William Thompson, editor of the the Georgia Daily Morning News in Savannah, who designed the official CSA flag from which this design emerged:

"As a people, we are fighting to maintain the heaven ordained supremacy of the white man over the inferior or colored race; a white flag would thus be emblematical of our cause. Upon a red field would stand forth our southern cross, gemmed with the stars of our confederation, all combined, preserving in beautiful contrast the red, white and blue. [...] Such a flag [...] would soon take rank among the proudest ensigns of the nations, and be hailed by the civilized world as THE WHITE MAN'S FLAG."[1]