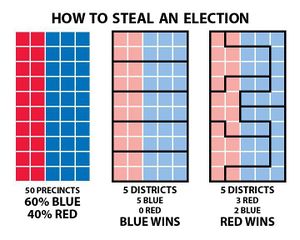 A more serious problem arises when the politicians who are elected within a system have the authority to affect the political boundaries which will be used in the next election, or even in the election of others with whom they might gainfully trade "favors", in effect giving long-term job security to incumbents of both parties and thus maintaining the two-party system.

Imagine if Pepsi and Coke had arranged to divide up the cola market into tidy little local geographic monopolies, where each could charge whatever they liked for colored sugar water... while claiming that their nearly 50:50 overall split means "healthy competition"! Hell, they could even do this while hating each other's guts, the same way that democrats and republicans now do.