The original author of this piece is Dave Dionisi; it was written as a press release for the Teach Peace organization. Despite its promotional nature, it is still appropriate content for Issuepedia as its presence here facilitates fact-checking and analysis to help determine the accuracy of its conclusions.

Editing of this copy is permitted. If it is edited significantly, the original copy should be retrieved and posted as an archival/reference copy not for editing (the "authored" category should then be applied to that copy, not this one).

With the author's permission, this piece was posted here and cross-posted to DailyKos, WikiNews (where it was apparently deemed inappropriate, and deleted), the San Francisco Bay Independent Media Center, and possibly other places.

Some cleanup is needed, especially links. The indybay link also has some additional content and sources which do not appear to have been posted here.

Our limited knowledge of life outside our borders is one reason why many people see great bargains as only good things and do not think about the starvation wages that lie behind those bargains. A more peaceful world is possible when we wake up to the injustices present in the world economy.

To illustrate this point, consider the question: What country in Africa has 85% unemployment and was a source of funds to help Michael Milken and the infamous Drexel Burnham Lambert launch hostile takeovers of American businesses?1 Maybe you can guess if you know that this is a country where diamond smuggling for al-Qaida and Hezbollah was reported after 9/11.2 Does it help to know that there is evidence that the CIA, as part of a destabilization campaign, orchestrated a recent war that killed approximately 300,000 people?3

I am guessing that for most readers the above clues did not help very much. The country is Liberia, a place where the majority of the population lives in mud, wood, and scrap-metal shanties without running water or electricity.4

I was in Liberia when the UN peacekeepers arrived in 2003, when combatants were disarmed in 2004, and when the first female president, Ellen Johnson-Sirleaf in the history of the continent was elected in 2005.5 I’ve also read a CIA Field Intelligence Report that will not be verified by the CIA until it is declassified but nonetheless accurately described how Liberia would be destabilized for complete external control. 6 I my opinion and others, history has repeatedly shown us that the CIA’s secret interference in faraway places like Liberia is anti-democratic and ultimately leads to death and destruction. See Category:CIA operations

During the 2003-2005 postwar transitional government, a 37-year land lease extension was granted for Firestone Corporation. Liberia has the largest rubber plantations in the world and Firestone Corporation is the country’s largest employer. Rubber from Liberia is used for tires and over 40,000 products around the world. Modest improvements at Firestone Corporation have occurred since the company was accused in 2005 of practicing slavery.7

Liberia has a long history of being exploited. During the Cold War, US news and propaganda flowed across Africa from the Voice of America in Liberia. The Omega Navigation Tower in Liberia helped the US track the movement of ships in the Atlantic Ocean. Liberia’s “flag of convenience” registry service was run by the US as part of the global intelligence collection effort.8 For decades, the US Embassy in Liberia has been the main base for the CIA in Africa.

This year, we saw how US debt relief totaling $391 million was used to bring about the Liberian government’s agreement to serve as the home for the new United States Africa Command.9 US taxpayers are also paying $200 million for weapons and a new 2,000-strong Armed Forces of Liberia. To put this in perspective, the UN just finished destroying thousands of military weapons as part of the effort to bring peace to Liberia. To further highlight the insanity of bringing weapons into the country, the $200 million now being spent on equipping Liberia’s military is enough to permanently provide clean drinking water for the entire country. As accurately predicted by the CIA Field report, the Class-3 destabilization campaign called Operation Green Sand has rendered Liberia primed for complete external control.10 I am convinced that if Congress authorized an investigation of the CIA’s involvement in Liberia’s civil war, the findings would shock the American people.

China is another international force positioning itself to be a major player in Africa. In February President Hu Jintao came to Liberia to open a center for malaria research, prevention and treatment. Imagine for a moment who will make more friends in Liberia, the US by establishing a major command with military bases or China by opening a life-saving malaria center? 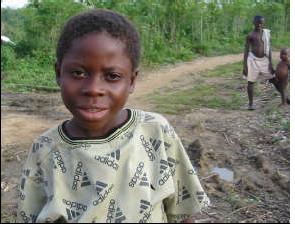 My criticism of the expanding US military empire and of foreign policies that hurt people can better be understood by knowing I work with Liberians who are still struggling to recover from 14 years of war. Working with war orphans is a powerful experience. I am the first white person that some of the children have ever met. When I first met Handful, he did not even own clothes. I remember having to borrow clothes from another child so that I could take this picture of him.

In summary, Liberia is a beautiful place where elephants still roam with many of the exotic animals we see on television. The people are extremely friendly and handle adversity with tremendous grace. Workers in Liberia and many other countries around the world are exploited by multi-national corporations. I have reasons to believe that this exploitation is managed by secret armies and intelligence operations. Teach Peace is helping people wake up so that we learn to export schools, hospitals, and friendship instead of military bases, weapons, and war.

The first Teach Peace class in Liberia was given to war orphans and poor children on May 26, 2007. Detailed footnotes for the above article are at High Cost of Low Prices Supporting Information. If you read the footnotes you will likely know more about what happened in Liberia than 99% of the Liberian people. From Teach Peace Foundation's July Newsletter[pdf]