The phrase "minimum wage" refers to laws which prevent employers from paying their employees less than a certain amount per hour of work. It also refers to the particular minimum amount required by legislation currently in effect. 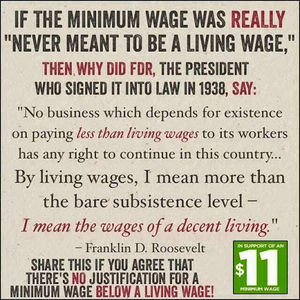 In the United States, minimum wage laws were originally created by President Franklin D. Roosevelt in 1938 with the express intent of providing a living wage to all workers:

No business which depends for existence on paying less than living wages to its workers has any right to continue in this country... By living wages, I mean more than the bare subsistence level – I mean the wages of a decent living.

Revenue-based minimum wage would avoid that potential problem while also more fairly distributing revenue from the most profitable businesses.