The GOP claims an unreasonable position in order to persuade the Democrats to do what the GOP actually wants as a "compromise". 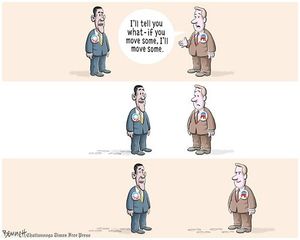 Moving the fulcrum is a use of interpretive framing in which one party takes up an extreme position (which they do not actually hold) in order to convince a third party of the validity of their actual position. It generally depends upon the fallacy of moderation in order to succeed.

Obviously this sort of argument wouldn't work if the facts were clear-cut; it's mainly useful in situations where the best answer is perceived to be a matter of opinion or judgment (whether or not this is actually true).