The scientific method is a set of methods for discerning reality in the face of cognitive bias and conflicting beliefs. It is the method by which science is done, and from which all scientific knowledge is derived.

At the core of the scientific method are the following steps:

It is important to note that hypotheses which are found to be inaccurate predictors must be discarded, however appealing or sensible they may have seemed -- and equally important to be willing to accept novel hypotheses whose predictions are found reliable, no matter how startling or counter-intuitive those hypotheses may seem at first.

It is, however, acceptable to set a very high standard for hypotheses that overturn existing understandings. 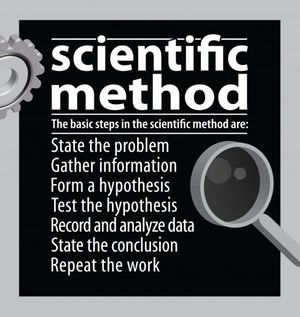