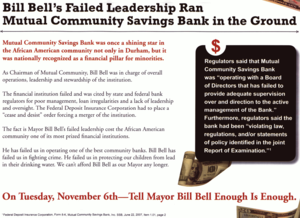 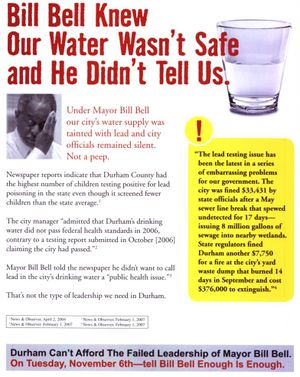 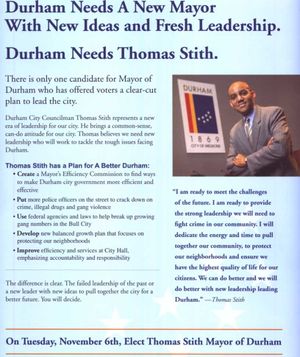 Thomas Stith III is a politician in Durham.

He was at one time employed by the Civitas Institute.[1]

He was on the Durham City Council from 1999 to 2007, and unsuccessfully ran for Mayor against incumbent Bill Bell in the November, 2007 election.

In January 2017, he was appointed by outgoing NC state governor Pat McCrory "to the board of the Golden LEAF Foundation, a state-chartered organization that recently received $25 million as part of the Hurricane Matthew relief package."[2]

Stith's campaign literature emphasized his interest in "lead[ing] a crackdown on crime"; the major points of his "plan for a safer Durham" were (from printed campaign mailer):

Another Stith campaign flyer (2007-10-23) accused Bill Bell of mismanaging Mutual Community Savings Bank into failure. My question is, if this is such a big issue, why hasn't it come up before? Like, say, during Bell's initial run for mayor? And exactly how bad was the "failure", given that the bank still seems to be operating? --Woozle 16:59, 24 October 2007 (EDT)

The word "elect" is in the web site's name, posted underneath, but that is in fairly tiny letters likely to go unnoticed by many people. --Woozle 07:41, 5 September 2007 (EDT)