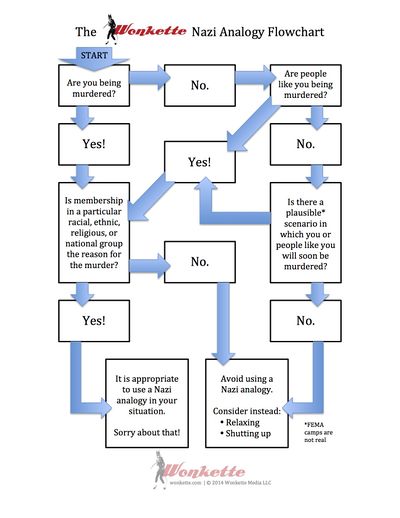 Godwin's Law is an aphorism having to do with the use of comparisons to Adolf Hitler or Nazism.

The law was originally stated in 1990 by Mike Godwin in this form:

As a Usenet discussion grows longer, the probability of a comparison involving Nazis or Hitler approaches 1.

Usenet being now largely supplanted by internet discussion forums and chatrooms, Godwin's Law's applicability has been transferred to those venues.

A tradition has also emerged that the first time such a comparison is made, the conversation is over and the person who made the comparison automatically loses the argument; this is sometimes referred to as "Godwin's Corollary", though a more accurate term would be "Godwin's [Law] tradition".

The blog Submitted to a Candid World has proposed that inclusion of the following language should negate the effects of the Godwin's Law tradition:

I, being duly sworn, depose and say:

Therefore, the rule of Godwin's Law, or Godwin's Corollary ("any individual referencing Nazis in an internet debate is deemed to have lost") should be waived.

It has become clear that Godwin's tradition hinders the free expression of ideas when such a comparison is actually legitimate, as became increasingly the case during the presidency of George W. Bush. We therefore propose the following modification to this tradition:

This is a specific case of a more general rule, which should probably apply in any discussion:

Mike Godwin himself has stated that "white nationalist"s (referring specifically to those who marched on Charlottesville VA, as he made clear in an interview with the Washington Post and a follow-up Tweet) may safely be compared to Nazis. "By all means, compare these shitheads to Nazis. Again and again. I'm with you."