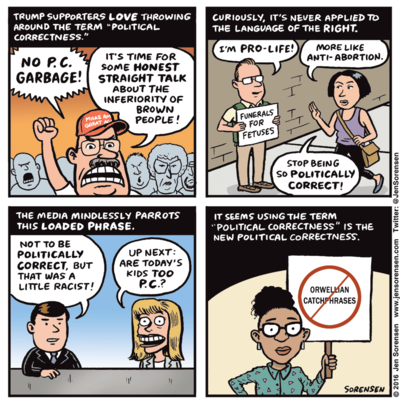 Originally a term used for self-criticism on the left, "political correctness" (or "PC") is now most often used by the Right as a put-down phrase (argument by label) for anything they dislike – which seems to be largely any form of consideration for certain types of people (basically, anyone not part of the white-male-protestant majority).

The term originated in left/liberal/progressive attempts to avoid accidental hypocrisy in public situations. For example, someone putting on a fundraiser for a liberal political candidate might be concerned that giving out party treats made in Chinese sweatshops would fail to be "politically correct" (since buying merchandise from such a source would work against liberal ideals in some small measure).

The Right later saw this term as a way of dismissing liberal arguments or positions as "political correctness gone wild" or "run amok". More recently, with the ascent of Trumpian authoritarianism, the Right seems to have embraced the idea that political correctness to any extent is a problem.

This often seems to be packaged with an assumption that anything which is PC must be untrue, and therefore anything which is "politically incorrect" must be true (which is a formal logical fallacy). For example, many people praise Donald Trump for "saying things that need to be said" and not "giving in to political correctness" – even when the "politically correct" position is objectively true and Trump's statements are objectively false.

While in theory "PC" could theoretically be used as a dismissal of any disliked position, the Right tends to use it against certain types of activity: