From Issuepedia
< Praxgirl
Jump to navigation Jump to search 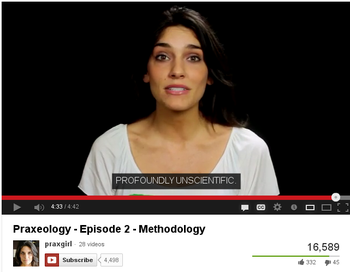 Praxgirl argues that studying human behavior through observation is "PROFOUNDLY UNSCIENTIFIC". Unfortunately, she bases her entire argument on a verifiably false "axiom", which she proves with a logical fallacy.

Logical fallacies aside, the primary assertion here is that human actions are purposeful. Since some human actions are clearly not purposeful, it is necessary to make some assumptions in order to fit this statement into a reality-based framework. The following interpretations are consistent with reality:

The final interpretation seems like the only one in which there is any practical point in studying Praxeology, so we will proceed with looking at the rest of the series under that interpretation. Praxeology applies only to actions that are clearly purposeful, and not to those which are arguably non-purposeful.

"Unlike chemistry or physics, when approaching human beings, praxeology has to employ a method of acquiring knowledge that does not rely on observation but on discursive reasoning1 -- or we may say 'logical deduction'. The laws that Praxeology arrives at are necessarily true and universal because they're logically implied by simple and undeniable facts."

"A fact is undeniable when any attempt to deny it must prove it to be true. Once we state one of these undeniable facts, we're able to discover further implied truths that hold at all times and to all individuals, regardless of sex, race, creed, or color. As long as the implied arguments are valid and their premises based on the initial undeniable truth, the soundness in every step of the logical chain is incontestable.2"

The starting point of Praxeology is one of these "undeniable truths": "Human action is purposeful behavior."3

(Just in case there's any doubt, she reiterates that all of Praxeology is based on this statement.)

This axiom is undeniable because in order to deny it, you have to act purposefully. ...therefore "logical deduction is the only necessary and fitting method to come to this conclusion."4

"...you might be asking yourself 'Is it appropriate to study human action through observation, or what scientists like to call induction?'5 To answer this we need only to consider the separation between the objects that sciences like chemistry or physics like to study and the unique characteristic of human beings that we stated before in our axiom. These sciences can plot out the courses of stones, atoms, or planets through cause and effect, but humans differ categorically in one key way: human being act!6 They have goals and purposes, and they try to achieve those goals. Stones, atoms, planets have no goals or preferences; hence, they either move or are moved. They cannot choose, select paths of action, or change their minds. [...] People cannot be quantified.7 People cannot be slotted and predicted as can objects without minds or without the capacity to learn and choose. The Action Axiom shows that the uniqueness of all individuals is the logically necessary starting point for studying human behavior."

Scientists have tried to disprove this, "but we can easily see how silly and futile their attempts are."8

(There is a brief interlude at Grand Central Station, where we're apparently supposed to be impressed yet again with how silly her straw-man is.)

"To try and box humans into the type of predictable data and statistics that work in sciences like biology, astronomy, or geology is not only completely inappropriate, but is essentially a denial of the Action Axiom, a contradiction."9

"Logically, the search for complete predictability in the realm of human action is the search for the impossible, and is therefore PROFOUNDLY UNSCIENTIFIC."

The video starts out with a firm claim (repeated multiple times) that all of praxeology relies on one central axiom, which is that human actions are purposeful. It never defines "purposeful", though there are certainly human actions which do not fit any common definition of the word.

It then attempts to prove this "axiom" (if you can prove or disprove it, it's an hypothesis, not an axiom) with a logical fallacy (the existence of a thing in one place does not prove that it is also in another). All of praxeology is therefore based on an ill-defined statement that is nonetheless demonstrably untrue.

Finally, the video attempts to argue further for the "axiom" by explaining that science can precisely predict the behavior of inanimate objects but not humans. The argument is problematic in at least the following ways:

1. This sounds suspiciously like pseudoscience, since a key element of science is reliance on observation to test hypotheses. If an hypothesis can't be falsified, then it has no scientific value.
2. If all parts of the argument are valid, then clearly we will see validity in all parts of the argument! If the circular argument is circular, then it must be correct! Therefore Praxeology!
3. So, Praxeology apparently exists in a universe without caprice or insanity.
4. All of Praxeology is therefore based on a logical fallacy. (Just because one has to act in order to make a point does not mean that all human action is purposeful.)
5. Oh those wacky scientists and their funny names for things! ...and that's not even what "induction" means. Induction -- by which I presume she means "inductive reasoning" -- means noticing a pattern and hypothesizing that the pattern will repeat. "Observation" includes both that part and the more critical part, which is testing the hypothesis.
6. This assumes that such action is not the result of predictable natural processes, and that sciences involving objects without volition (which apparently includes every animal except humans) can precisely predict the actions of those objects; neither of these assumptions is true.
7. This is the part which suggests most strongly the propagandistic nature of praxeology. The people who advocate this philosophy are generally "free market" advocates: the level at which they operate is more about analysis of statistics involving people (mainly financial and marketing) and far less about achieving any generally-desirable goals. They live and breathe statistical analyses of human actions. For someone with that knowledge to claim that "people cannot be quantified" is not just wrong, it's a deliberate attempt to manipulate us into thinking that praxeology somehow places high value on human individuality -- presumably so that we won't notice how wrong it is.
8. Those silly scientists! Always trying to prove things. Can't they see how ridiculous they are?
9. It contradicts the uncontradictable axiom, therefore it must be wrong!