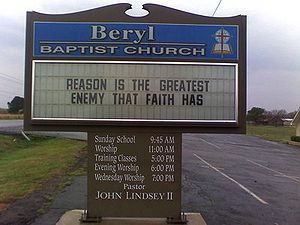 The basic problem seems to be that religion posits the source of ultimate truth to be either revelation (divine messaging from God or other metaphysical sources) or scripture (works of text held to be sacred or inerrant), either of which may override rational analysis.

What Rationality Says About Religion

Rational analysis of religious belief leads to the following conclusions:

What Religion Says About Rationality

The Bible actually instructs its followers not to trust their own thinking if it goes against what God says (Proverbs 3:5). Martin Luther extended this line of thought by adding:

Reason is the greatest enemy that faith has; it never comes to the aid of spiritual things, but more frequently than not struggles against the divine Word, treating with contempt all that emanates from God.

Whosoever wants to be a Christian should tear the eyes out of his reason.

Reason should be destroyed in all Christians.

(all quotes found in The God Delusion, page 190)

Recognizing this direct conflict (implicitly if not explicitly), defenders of religious thought therefore came up with the idea of "separate magesteria", which is the idea that religious thinking is simply inaccessible to reason whilst still being somehow "true" because religion and reason are somehow in different realms of thought ("magesteria"). What remains unclear is: