Difference between revisions of "Normal/ambiguity"

From Issuepedia
< Normal
Jump to navigation Jump to search 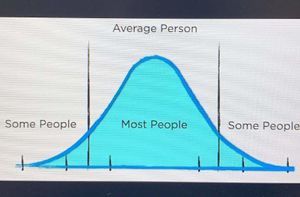 one rigorous way of defining "normal"

While the term "normal" has a number of very clear and precise definitions in the field of mathematics, and a few terms of art in chemistry and physics, it has no clear definition in the context of social science. The most applicable definitions seem to be lay terms:

For this reason, it is problematic when a social scientist (psychologist, sexologist, etc.) describes a behavior or identity as "not normal". Since there is no scientific definition in this context, the scientist is using imprecise lay terminology to make a statement that may carry with it the weight of scientific authority.

Sexologist Ray Blanchard has described homosexuality as "not normal":

I would say if one could start from scratch, ignore all the history of removing homosexuality from the DSM, normal sexuality is whatever is related to reproduction. Now you have everything else. I would distinguish between behaviors which are anomalous and benign vs. those that are malignant. So homosexuality would be not normal but benign. Whereas something like serious dangerous sadism would be a malignant variation.

He defines "normal sexuality" here, but does not explain why this interpretation of the word "normal" is objectively reasonable.

He then goes on to complain that "normal" is considered to be a problematic word, but straw mans the arguments against it as, basically, political correctness, even though he acknowledges that this view is not a recent fad:

I always say "normal" is the other n-word. You just aren’t allowed to say it. I would say I have almost never written the word normal because for decades now, since I was a graduate student, and I’m an old man, normal has been a dirty word.

A more commonly-understood definition of "normal", in this context, would be something like:

a notable, consistent, and persistent variant; "normally enough observed that there is a considerable literature and understanding across numerous fields of study".

– into which definition homosexuality and non-reproductive hetero sex clearly fall (not to mention that non-reproductive sex is clearly in the majority of sex activity, and therefore quite "normal" in the sense most commonly understood).

Meanwhile, the term also carries with it the weight of "social norm", wherein anything designated "not normal" may in fact be something that is considered socially unacceptable. By redefining the word in this very specific way in this particular context, he is bringing the weight of that common understanding and implying that all non-reproductive sex is somehow socially unacceptable – while only drawing attention to this fact with regard to homosexuality in particular, thus leaving the reader with the strong impression that there's something wrong with homosexuality while only weakly implying the same thing (for those who might happen to think it through) for other forms of nonreproductive sex.