Perform the following thought experiment. Remove yourself for a moment from your present socioeconomic circumstances and imagine that you are to be replaced randomly into society at any class level.

Now, before you know your particular place in society you are told that it is within your powers to redistribute the wealth of that society in any way that you choose. What distribution would you choose? This famous thought experiment is the basis of political philosopher John Rawls, as outlined in his highly influential 1971 work, “A Theory Of Justice,” in which he argues that the lowest class should be made as well off as possible. But this of course assumes that we all come to the same conclusion when we perform the thought experiment ourselves. To test this, Mike Norton and I recently conducted a study in which we asked Americans to first guess at the distribution of wealth in the United States, and then we asked them to perform the thought experiment and lay out what they think would be the ideal distribution of wealth if they were to enter society and be placed randomly in a class.

Here is what we found: 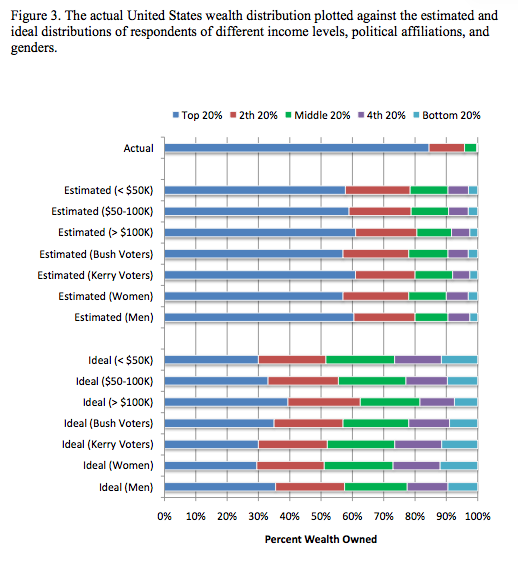 What this tells me is that Americans don’t understand the extent of disparity in the US, and that they (we) desire a more equitable society. It is also interesting to note that the differences between people who make more money and less money, republicans and democrats, men and women — were relatively small in magnitude, and that in general people who fall into these different categories seem to agree about the ideal wealth distribution under the veil of ignorance.

Maybe this suggests that when there are no labels, and we think about the core of our morality in abstract terms (and under the veil of ignorance), we are actually very similar?