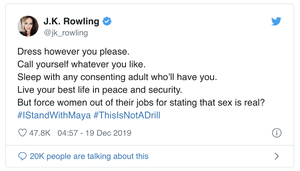 Bestselling author J.K. Rowling has become infamous for her support of anti-trans beliefs and misrepresentations generally following the TERF philosophy, which of course have been strongly supported by those aligned to such beliefs. The hashtag #IStandWithJKRowling has become a dogwhistle for transmisia on Twitter and elsewhere.

It is somewhat ironic that an author whose books were unreasonably reviled by fundamentalists in the early 2000s has become herself an exponent of gender essentialism, a form of gender fundamentalism.

It also seems worth noting here that the pen-name JKR uses for mystery fiction, "Robert Galbraith", has a large overlap with the name of Robert Galbraith Heath, an early advocate of gay conversion therapy and the now-discredited idea that all mental illness derives from biological defects and is therefore treatable by physical means.

Videos (not yet reviewed by Issuepedia)