From Issuepedia
< User:Woozle
Jump to navigation Jump to search 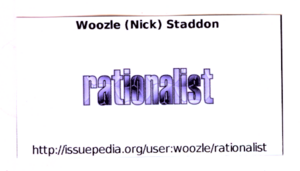 My name is Woozle. I carry a card.

I am a card-carrying rationalist.

So I've decided to stand up for rationality, and carry a card espousing my allegiance to it.

Rationalism is the belief that better solutions arise from conscious, deliberate analysis of the evidence (objective and subjective), rather than by depending on authority, tradition, scripture, or any other method of determining truth.

Rationalism does not ignore emotion and intuitive feeling, but recognizes that the universe is far too complex a place for there to be any rigorously provable "correct" answer for everything; it does, however, consider that some problems are more subject to logical rigor than others.

Rationality is the basis of sanity; deliberately ignoring rational arguments is an indication of ignorance, dishonesty, or insanity.

Our entire civilization ultimately depends on people being rational. Cynics may argue that this explains why we're in the mess we're in, and they may be right – but the implication that rationality is therefore suspect (and rationalism hopelessly idealistic) is completely backwards: we need more rationality, and more people standing up for it, if we're not going to end up in an even worse mess.