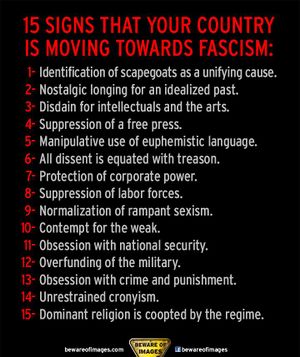 Fascism is a political ideology with no core doctrine, being largely a similarity cluster of beliefs and values which generally result in a totalitarian political state which controls all capital and labor. Fascist states have generally been archetypal examplars of centralized economic planning.

The primary psychological motivation behind fascism appears to be worship of political power for its own sake, and the use of force to increase and maintain social inequality. It is the ultimate expression of right-wing ideology.

...the liberty of a democracy is not safe if the people tolerate the growth of private power to a point where it becomes stronger than their democratic state itself. That, in its essence, is Fascism—ownership of Government by an individual, by a group, or by any other controlling private power.

Fascism should rightly be called Corporatism, as it is the merger of corporate and government power.

...when a rather mainstream person like Robert Skidelsky, the biographer of Keynes, describes the early postwar systems as modeled on fascism, he simply means a system in which the state integrates labor and capital under the control of the corporate structure.

That's what a fascist system traditionally was. It can vary in the way it works, but the ideal state that it aims at is absolutist -- top-down control with the public essentially following orders.

Fascism is distinguished from the broader category of extreme right-wing politics by its willingness to defy public civility and openly violate the law. As such it represents a radical departure from the tradition of ultra-conservatism. The latter aims to preserve established social relations, through enforcement of law and reinforcement of authority. But the fascist organizations of Mussolini and Hitler, in their conquests of power, showed no reluctance to rupture peace and repudiate parliamentary and other institutions; the fascists employed terror against both the existing political structure and society at large. It is a common misconception of political science to believe, in the manner of amateur Marxists, that Italian fascists and Nazis sought maintenance of order, to protect the ruling classes. Both Mussolini and Hitler agitated against "the system" governing their countries. Their willingness to resort to street violence, assassinations, and coups set the Italian and German fascists apart from ordinary defenders of ruling elites, which they sought to replace. This is an important point that should never be forgotten. Fascism is not merely a harsh dictatorship or oppression by privilege

If fascism could be defeated in debate I assure you that it would never have happened, neither in Germany nor Italy nor anywhere else.

Only one thing could have stopped our movement - if our adversaries had understood its principle and from the first day smashed with the utmost brutality the nucleus of our new movement.