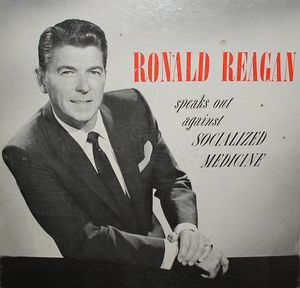 Ronald Reagan tried to warn people about the dangers of having a proper national healthcare system. Apparently we listened.

Ronald Reagan was the 40th president of the United States.

Many people see his administration as being the beginning of the latter-day neoconservative takeover of the US government which segued smoothly into George H.W. Bush's presidency, was interrupted only slightly (with much empty scandal stirred up by unhappy neocons hoping to knock the reins of power back into the right hands) by the presidency of Bill Clinton, and subsequently rekindled during the evangelistic, opaque administration of George W. Bush.

The kindest thing you can say about Reagan is he may not have known what the policies of his administration were, but I'll pretend he did. The Reagan years was a period of devastation and disaster in El Salvador. Maybe seventy-thousand people were slaughtered. The decade began with the assassination of the archbishop. It ended, rather symbolically, with the brutal murder of six leading Latin American intellectuals, Jesuit priests, by an elite battalion, trained, armed, run by the U.S., which had a huge, bloody trail of murders and massacres behind it. The priests are also shown in the picture along with their housekeeper and her daughter, who were also murdered by the same elite battalion, and in between tens of thousands of the usual victims. That was El Salvador. And, as I say, people south of the border know what it is; people north of the border haven't a clue.