From Issuepedia
< User:Woozle‎ | positions‎ | 2013
Jump to navigation Jump to search

At its best, religion seems to provide a shield against cynicism. This seems to be the real reason why any intelligent people become religious at all; they care about other people, so they want to be "good", and in their experience only religion offers any guidance on that topic.

I think people confuse faith with idealism (wanting to be/do good, to help people, to improve things); organized religion encourages this confusion, because faith is much more easy to manipulate. Many people of good will find religion appealing, and I think it is the idealism of it which they find appealing. Many non-religious people are reluctant to attack religious fallacies because they don't want to destroy someone's faith. It is not necessary to destroy someone's idealism while arguing them out of blatantly fallacious ideas.

The more of these attributes a religion possesses, the worse it is. Islam, for example, includes all four attributes. Even the worst fundamentalist varieties of Christianity generally have no (real) punishment for renouncement (aside from metaphysical threats – burning in hell and so forth – which are only meaningful to a believer), and can be minimally tolerated within a modern society – although not within the sphere of public discourse (e.g. passing a resolution blaming Satan for illegal immigration). Any one of these attributes renders an idea unsuitable as a basis for policy.

A religion which has none of these attributes, on the other hand, is far more likely to be capable of making rational decisions and therefore meaningfully participate in a sane civilization.

The solution is not to wipe out toxic religions, but rather to make them less toxic by encouraging religious individuals and groups to renounce the toxic aspects. 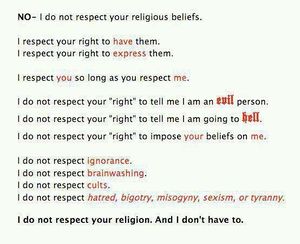 Some people accuse activist atheists (e.g. Richard Dawkins) of being "evangelical", and just as bad as the religions they attack. I disagree, though I do think there should be some specific boundaries and objectives:

Thanks to "Progressive Conservative" for nudging me to examine this question in this conversation.

Also, I agree with the positions of PZ Myers as expressed in this article, despite the author's attempts to reframe atheism and science as some kind of insidious suppressive propaganda: we need more science, which will naturally lead to less religion, which is fine because we need less religion too.

Being Christian is not sufficient reason for being anti-gay. Unless you obey every single rule and restriction in the Bible (and how can you, when nobody can agree on exactly what rules the Bible actually spells out and which are merely given as historical background?), you are choosing which ones to obey and which ones to ignore. This means that you have chosen to decide that "marriage is sacred" or "marriage means one man and one woman".

The Bible is not a source of moral authority. You must make up your own mind, and be prepared to explain how you arrived at your decision.

(2007-09-25) Christians say that Jesus Christ died for my sins, and that therefore I should do all kinds of things. Stepping into their universe for a moment to address this: It's kind of a done deed now, but if I had the choice, I would tell Jesus: "No, please don't do that. You seem like a decent guy, and I bet we could benefit a lot more from the things you could do in a long life (write down your philosophy so we can really understand it! That would be sheer gold, and might have done a lot of good in the centuries after your death.) than from this "being saved" thing. Have a good life; don't go dying on my account. I'll take the heat. I'd rather not have your death on my conscience; that would be worse than any hellfire or purgatory could possibly be."

Since he's apparently gone and done it, however, without my consent, I have to say "thanks, I do appreciate it -- but I don't think this obligates me to anything, although you might still be able to talk me into it." Many Christians don't seem to understand that you attract more flies with honey than with fire and brimstone; sweet reason is so much easier to swallow than terroristic metaphysical threats. Good theatre, though, and amusing at times (or it would be amusing, that is, if innocent people weren't being hurt and killed by it).

I believe that making one's own judgements is an important part of being human (in the best sense of the word). I don't mean that you should never say "well, I'll defer to your judgement on this"; you're still making the final judgement call about whether to trust the other person's opinion, on a case-by-case basis. The problem arises when a person (a "follower") accepts the judgement of another (a "leader") as supreme on all matters, and only allows their own judgement to prevail when the "leader" has no opinion or specifically gives the "follower" permission to decide on his/her own.

Organized religion worries me, in large part because of this very tendency to centralize ultimate moral authority.

Anyone who says that everything good in their life has come from their religion obviously hasn't read enough good science fiction. (Recommendations to follow, when I get around to it.)