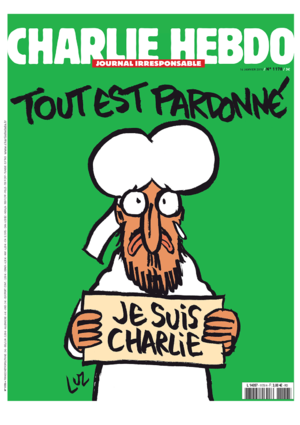 The issue of Charlie Hebdo which immediately followed the 2015 attack was captioned "tout est pardonné" (all is forgiven) and featured a cartoon of Muhammad holding a sign saying "Je suis Charlie" (a reference to a popular hashtag expressing sympathy for the magazine and opposition to the attack).

The cartoon was clearly intended to accomplish two things:

While some Muslims inevitably took offense at the depiction of Muhammad, this can only be justified on the basis of Islamist ideology, i.e. that Islamic law should prevail over secular social and legal rules.