From Issuepedia
< Muhammad
Jump to navigation Jump to search 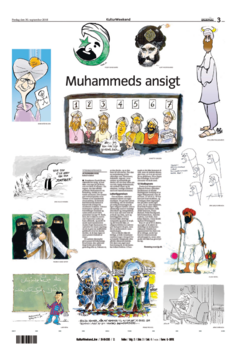 The page which provided the excuse for the violence

A set of cartoons depicting the Prophet Muhammad, founder of Islam, sparked riots and led to the burning of the Danish and Norwegian embassies in Damascus (Syria) and the Danish consulate in Beirut (Lebanon), and much uproar in the Muslim world.

First, it seems clear that if we apply the filter of symmetry to this situation, the protesters were utterly in the wrong. How many American flags have been burned by angry Muslims, with no threat of retribution from America? A little anger in response, perhaps – but surely burning a country's flag is calculated to achieve just that response. By behaving like spoiled children with dangerous weapons, the rioters who burned the Danish and Norwegian embassies (severe material damage, in exchange for what damage done to them?) have given up any weight their opinions might have carried.

Second, it seems likely that the outrage was largely manufactured. There have been countless depictions of Muhammed throughout history, including many within the past couple of decades (not to mention the bas relief in DC), with no kind of furor whatsoever. The pamphlet which apparently incited the riots contained three additional, crudely photocopied images almost calculated to be insulting to Muslims, and which had no connection with the original 12 cartoons. The supply of Danish and Norwegian flags, as one observer has pointed out [1], was suspiciously ample on such short notice. (...although this may have been partly free-market forces at work [2]) It is those who incited and nurtuted this outrage who should be held accountable, if they can ever be identified.

This is where two key modern ideals – freedom of speech and religious tolerance – seemingly crash into each other. On the one side, we have a group exercising their right to freedom of speech by satirizing a religious figure. On the other side, we have a group who feels that their faith is being threatened, and so they use their freedom of speech to protest against a claimed lack of religious tolerance. So far so good. The problem comes when the offended group also presume a right to physical revenge against printed insults, a right which is not mandated by the laws of any civilized nation.

Freedom of speech is a key element of modern, enlightened society. We have found, through long, painful experience over the centuries that it is the only way to prevent tyranny.

Freedom of speech does not guarantee freedom from being offended. It not only almost guarantees that someone will eventually say something that offends someone else, it also guarantees them the right to say it. A number of followers of Islam, unfortunately, apparently did not share a belief in the freedom of speech as a key element of modern civilization; apparently they believed that any affront to their prophet Muhammed gave them the right to deliver deadly retribution.

Another key concept in modern, enlightened civilization is the idea of reciprocity (or symmetricality), which is the idea that any laws must sound just as good if applied to me as they do when applied to you. So if you were to have the right to burn down my embassies when I make fun of or insult your core beliefs, then I must also have the right to burn down your embassies when you make fun of or insult my core beliefs. A brief examination of history would show that this would have resulted in considerable retaliation against representatives of Islam and the Islamic nations, had it been applied within recent memory (think "Death to Carter! Death to America!" in the late 1970s, for starters).

Fortunately, modern society has learned, through long experience, that allowing that sort of retaliation is a bad idea – in part because it leads to just that sort of useless violence, followed closely by magnified retaliation from the other side (who is now not just verbally insulted but physically assaulted), and on into ever-escalating cycles of retaliation until both sides are decimated. Even though death threats – such as those America is used to hearing from the Islamic world on a regular basis – are not considered free speech, physical retaliation for solely verbal abuse is not an enlightened behavior pattern. We only retaliate when attacked, and we only attack when a real, physical threat can be shown. (This concept is, in fact, at the core of the current debate over the morality of the US invasion of Iraq, where the evidence of threat was largely invented, thus making the United States the illegitimate aggressors.)

In enlightened countries, we are taught these principles from a very young age: "Sticks and stones may break my bones, but names can never hurt me" and "Do unto others as you would have others do unto you". We can be tolerant of the foreigner who peacefully enters our city and trades with us; we cannot be tolerant of the invader who kicks over the stalls of our merchants or sets fire to our buildings.

Those who were offended by the cartoons had every right to publish their own equally scandalous or scathing ripostes. They did not have the right to pillage, burn, and kill. To the extent that they insist upon this right, they are the enemies of civilization, and would have us return to fighting endless wars of retaliation and revenge until we are reduced to savagery.

Editorial note: the discussion of the event continues for another two pages; possibly the quotation could be both extended and more selective, to hit the highlights. We should also clearly make the point, possibly at the top of the page, that despite repeated discussion of "hurt" and "suffering" on the part of Muslims, the only people who were actually hurt or actually suffered were hurt by rioting Muslims. --Woozle 22:02, 14 February 2007 (EST)