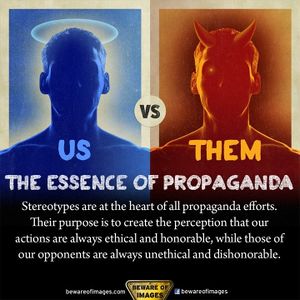 Demonization is a form of fearmongery which unifies the speaker's group by blaming its troubles on imaginary threat, towards which all ire can be safely directed.

In addition to the obvious utility to up-and-coming powermongers, it can also be used by established power-brokers for effecting political change without going through appropriate political channels – thus avoiding the accountability which is normally associated with such channels and which might therefore make those actions more difficult to accomplish that way. In more colloquial terms, it enables the powerful to get what they want without getting their hands dirty.

Due to the strong negativity of the word "demonization", it is often used as a way of shutting down legitimate criticism. It is therefore important to define both what it is and what it isn't.

The key elements of demonization are counterfactualism applied to a specific individual or group.

Although demonizing speech may use the words "justice" or "fair", this is always in the context of calling for actions that are retributional rather than fair or justice-seeking. If a viable accusation (i.e. one that is not clearly counterfactual) concludes with a true call for justice, including all the due process thereof, it is not demonization.

Note the first requirement; accusations cannot constitute demonization if they are true. For instance, it would not be demonization to describe Nazi detainment centers as "death camps" or to say that Hitler was evil.

Although demonization is primarily a tool used by the powerful, it can also be applied within smaller contexts. For instance, if one person on a discussion forum falsely tries to convince others that some group or individual (on or off the forum) is malicious (or evil) and that some action should be taken, the former is arguably demonizing the latter on that forum.

In order to lay a legitimate claim that one party has been demonizing another, it is necessary to show specific examples where the former has made false statements about the latter. If there are not any ready examples, then it might be best to less loaded but more descriptive phraseology such as "shows a pattern of false accusations against" or "regularly claims that [target] should be [form of retribution] using false data and bad reasoning". See Issuepedia:Arguing for additional guidelines.

Some of the finer definitional points emerged from this conversation.