Gay marriage (where "gay" refers to same-sex relationships of any gender; also called "same-sex marriage") is an issue because some people want to do it and some others find it distasteful and/or believe it to be immoral.

As with homosexuality, there do not appear to be any arguments against gay marriage which hold up under scrutiny. Those who seek to prevent gay marriage are waging a war on the family – and, with typical religious-right hypocrisy, use that same term to defend their actions.

Arguments against gay marriage include: 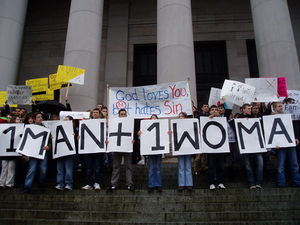 This is an argument by definition. What gay people want from "marriage", aside from the feeling of being part of a family with their loved one, is the legal recognitions and protections for that family.

The essential argument in favor of gay marriage is "why the hell not?". It's kind of hard to write a cogent paragraph summarizing why it should be allowed, for much the same reason that it's difficult to write an argument for why people should be allowed to hold hands in the living room as well as in the dining room, or why we should allow houses to be painted green instead of blue.

In lieu of a definitive argument, then, here is a relevant quote: